We appreciate your efforts to use public transport or ride the bike.

Since our nearest bus stop is cancelled because of road works in Brakel, the bus is at 2.2 km, or a half an hour walk over a sand road (and some normal road). You’ll be more mobile if you travel by backpack (rather than trailer). If you need help to carry your luggage, contact us. We can perhaps pick up your luggage with the cargo bike, and bring a foldable bike for you. If it’s necessary, we can also pick you up by car at the trainstation of Ronse, Geraardsbergen or Zottegem. Just take into account that the car is not always available.

Maybe you want to follow the ‘Mijnwerkerspad’ (“miner’s path” in Dutch): this is an old railway embankment between Zottegem and Ronse, turned into a GR bicycle path. But be careful, the path is interrupted in Opbrakel. Coming from Ronse, it’s better to turn left at Hurdumont. Coming from Zottegem, you turn right at the interruption. If you want to follow the ‘fietsknooppunten’ (a network of fixed cycling routes between several points), we are between points 48 and 99.

For travel direction, check the website of the NMBS.

If you come by train from the border of Belgium, and you are younger than 27, this ticket could be the cheaper one.

If you plan to make at least ten trips in Belgium, this might be the cheapest option if you’re under 27 and this if you are older.

It’s easiest to reach us by bus from the train stations of Ronse and Zottegem. From these train stations, you can use buses numbers 21 through 25. 21 is the most frequent. The stop you should take during the works is ‘Vloesberg bos’. You  can find the timetables for these busses on the website of De Lijn. You have to press a button on the bus, to ask him to stop. Check for the stop on your route planner, or ask the bus driver beforehand to warn you.

Tickets can be bought on-line, even as you get on the bus. The cheaper option is a ticket for ten rides that you can buy either on-line or in trainstation or newspaper shops.

On the image below the route from the bus stop to Boskanter is displayed. 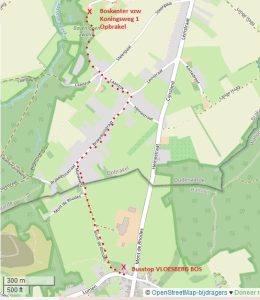 You can buy tickets with your phone or in the trainstations and newspaper shops.

Aim for the crossroads between Pullem and Koningsweg instead of ‘Koningsweg 1’. Because Koningsweg consists of two parts with a forest in between and the GPS can send you to the wrong end.